For the last quarter I have worked in Red Hat’s Testing Farm (TFT) and “Operating System CI” (OSCI) and teams, on a temporary rotation. TFT develops and runs the Testing Farm (TF) infrastructure, an API which you tell “go run a test with $these parameters, it allocates a bunch of cloud instances, sets them up, runs your test, and returns the result. OSCI builds upon this to implement Fedora’s and RHEL’s gating tests for package updates, image builds, upgrades, and so on. Everytime you look at Fedora’s bodhi and see these, you are looking at results provided by these teams:

As Cockpit and Fedora developer, I usually sit on the receiving end of these tests. My colleagues and I often found them hard to understand, investigate, and reproduce. So I took another chance to do a work rotation to improve them myself, get to know more colleagues, understand their problems and perspectives, help with their problems of the day, and learn something new.

My first exercise was to replace TF’s results viewer. It was based on an outdated fork of xunit-viewer, which came with several drawbacks: It was hard to extend (you could not even add clickable links to artifacts!), unwieldy to use/deploy (you need npm install and a build chain), and rather heavy (over 2 MB that your poor browser had to download and interpret for every test result).

So I came up with oculus. It mainly consists of a ~ 10 kB static results.html file which is trivial to deploy – just copy that file. It shows you all the important logs and artifacts, so that as a developer you have a better chance to understand what went wrong.

It’s quite simple and easily hackable, Miroslav already added some improvements to it. All the other files are for the cypress.io browser integration tests and ESLint static code checking.

My biggest gripe with gating tests has always been that they were really difficult to reproduce and investigate locally. TF does magic things behind the scenes: most importantly, the installation of the test artifact like the COPR build or bodhi package update that is being tested. But also some VM preparation like updating packages and applying various hacks.

With the old results viewer, none of that was even visible. Oculus at least showed you the guest setup logs, but they still remained hard to discover or apply to a local tmt run in a VM. The tests did produce something called a tmt-reproducer.sh, but it was very incomplete:

This was from a GitHub PR packit run, i.e. testing against a COPR build. Nothing in that reproducer would actually install the COPR and the package to be tested, so if you’d actually run that, the test would just fail early and yell “HAHAHAHAno!” at you.

The central project for that activity is gluetools-modules, which implements all these steps like “run guest setup playbooks”, “install COPR repo”, “invoke tmt”, and “build a results.xml”. Unfortunately that project has a lot of historical baggage, so it is a lot bigger and more complex than it ought to be, and I found it rather hard to understand and get a feeling for. But after a few weeks I made some progress and eventually landed a bunch of improvements:

I fully acknowledge that this is very messy – my plan has always been to first make it work, and then make it pretty. At least after some research I now know exactly how to improve this – this has just been blocked for a while as the TF team is currently doing some major cleanup work and paying down technical debt on this project. So I will finish this up in January.

rpminspect analyzes new package uploads for generic issues like bad/missing licenses, ELF/library linker problems, broken shell syntax, bad dependencies, and so on. It runs for every Fedora and RHEL update.

The OSCI team was not happy about the rather complicated way how it was run, and the suboptimal presentation of the results.

So I first repeated my oculus exercise of creating a customized viewer for rpminspect results. Followed by a rather big Yak shaving exercise to clean up the rpminspect runner pipeline and use the custom viewer, in a way that is generic and useful for any other test.

Now they look like this. As the TF results will be cleaned up in a few months, here is a scaled down screenshot: 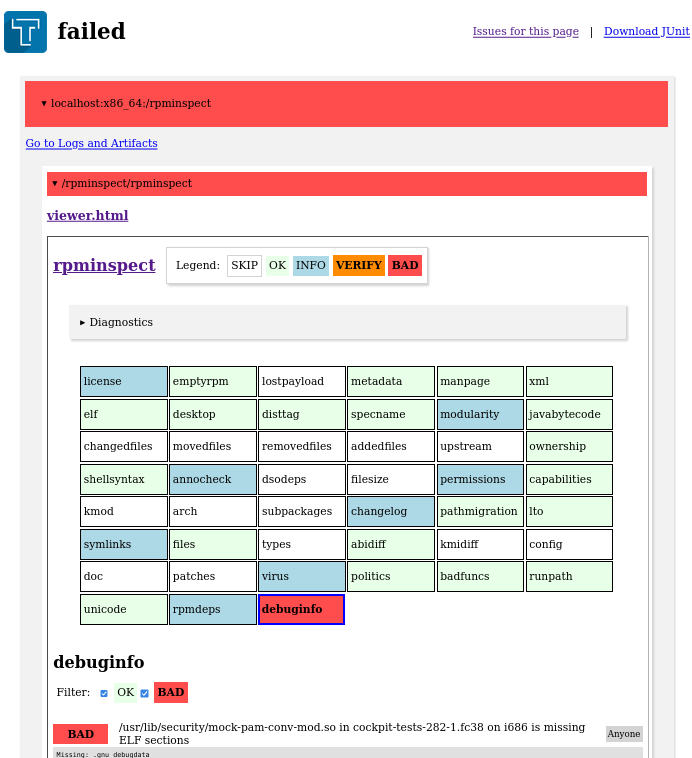 Your own TMT tests can have extra artifacts as well now, like custom viewers, coverage reports, screenshots, or journal logs. tmt 1.18 introduced creating a custom results.yaml, the TF will plumb that through, and oculus will show them. Your plan’s discover: has to declare result: custom like this:

and your test needs to create $TMT_TEST_DATA/results.yaml like this:

I want to thank the OSCI and TF teams for their warm welcome; especially to Miroslav Vadkerti and Michal Srb for taking the time to explain stuff to me, discuss ideas, and review code changes. I had some fun, learned new things, and hope to have improved things a little.

Have some nice end-of-year holidays everyone!