Yesterday, GUADEC hosted a PyGObject hackfest. I was really happy to see so many participants, and a lot of whom who are rather new to the project. I originally feared that it would just be the core crew of four people, as this is not exactly the shiniest part of GNOME development.

So I did not work on the stuff I was planning for, but instead walked around and provided mentoring, help, and patch review. Unfortunately I do not know all the results from the participants, hopefully they will blog some details themselves. But this is what I was involved in:

Thanks everyone for participating! I hope everyone enjoyed it and got to learn a new thing or two. See you at the next one! 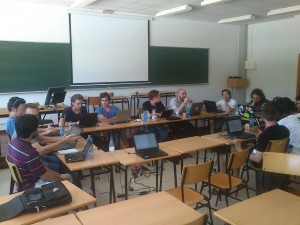